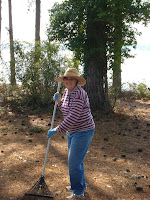 It has been very wet here in "the Midlands" of South Carolina. Over a week ago, we got a surprise gift of five inches of snow! Unheard of here. The last time this state received a dump of snow like that (Columbia received about nine inches) was in 1973. We are only just beginning to stop sliding on the wettest sections of our clay and dirt road.

Because we have been busy over the last year building our dream house in RI (the northern half of our new "Snowbird" lifestyle), we had no time or energy to keep up with "The Lakehouse" property. Our yard consists of many huge Lob-lolly and Long-leaf pine trees; Magnolia and Holly trees (in NE, Holly are mostly shrubs), red, pink and white Camillia trees; every color of Azalea, and one huge Oak-leaf Hydrangea. Spring is my favorite season, and lucky for me, I get an extended season by living in both South Carolina and New England.

But in the eight years we've owned this place, the lovely centipede grass is mostly dead and gone, replaced by sandy dirt that was lovingly spread over years (one wheelbarrow at a time) by Marilyn, the late previous owner who created this blooming paradise we now enjoy. A carpet of pinestraw (called pine needles in NE)has covered the lawn and killed much of it over time. We tried hiring men to come and rake it clear several times a year, but finances have changed and we can no longer afford to hire anyone to help with this chore. It wasn't raked enough to keep the grass from dying anyway.

So, now I get another "free gym" experience in the yard raking the wet pinestraw off what living grass remains. It's hard work, but my shoulders and upper arms are slowly getting used to it. My hips don't feel as stiff at night, but my knees are bothering me a little. This time, I have decided to try and make this two-acre area as low-maintenance as possible. I am breaking the chore up into sections; raking paths around the trees, and leaving grass in the paths only. I will pick up pinestraw piles that could kill the pretty ivy plants along the periphery, but it will become the mulch I will not now have to buy before the summer heat and possible drought hits. It is a nice look, and I am happy with the result.

I began by clearing debris from around the entire house and pulling vines out of trees and shrubs. Wisteria vines are the most pervasive around here, and briars. I cut branches away from my head and shoulders, so walking the paths is easy and stress free. Once the weather gets warmer, spiders will begin making webs between the trees along the paths. The further away the branches are, the fewer the webs (or so I hope). Those little critters can build pretty long web connections. Some are very impressive. In the heat of summer, I carry a stick around with me to swish in front of my face before walking around. Those webs are usually right at face height. Not very pleasant. If I want my family from NE to come visit, I have to make this bug haven as unscary for them as possible. I learned long ago to make peace with the critters of the country. I no longer fear them. It helps...a lot.

It's also important to keep piles away from living areas. Piles become homes for other unwanted critters like snakes, scorpions and snapping turtles. Nothing to be scared of, just to remain aware about. And, clearing the pinestraw makes Fire Ant mounds more visible. They are pretty visible anyway because they can get pretty big and red in this clay, but they still go dormant in cold weather and get covered up by the debri. "Better to be safe than sorry," is always my motto. I was a Girl Scout afterall.

Once I get the grass cleared, I can finally spread that pelletized lime I bought three years ago with a new spreader I never used. Then I can fertilize and spread new grass seed. I love grass and I want it back. My sister-in-law said, "But then you have to mow the lawn." Well, yes, but I like the look and feel of grass over sand and dirt. And, we'll eventually get another riding mower. We bought the old rider off of Fred, the late previous owner and husband of Marilyn (the gardener), but it got wrecked with family helping out by riding it over stumps and large rocks. We have a self-propelled power mower now, and this yard is a lot of work.

We do have an in-ground, lake-fed sprinkler system that Larry fixed. I look forward to warmer nights, so we can prime it and water the lime once I spread it. We'll get it on a timer eventually, so the new grass can get watered while we're up north. We always have a plan. We spend most mornings discussing and creating our plans leasurely over coffee. We're only good for a few hours' work in the afternoon anyway. It gets dark an hour later here than in New England.

The trees and shrubs are budding nicely now. I fertilized the Lady Banks rose that is struggling, but still alive, and the other rose plants I placed next to the garage (or "the shed" as we call it). The shed is a very large metal building, big enough to house a car or a boat. Marilyn used to plant tomatoes next to it in a garden that has become overgrown with weeds. My other sister-in-law planted a lovely Butterfly plant there and we planted a pink Crepe Myrtle tree there too. It also hosts the grave of Fred and Marilyn's Basset Hound, Droopy. He has a concrete marker that we leave alone. We respect the history of what this lovely couple created and add some new touches of our own as we go along to expand that history. It feels right and good to do it, and we feel very blessed.
Posted by Kathy Crowley-Gardner at 6:52 AM No comments:

After eight years of an overflowing toilet in "The Flipper" bathroom, Larry now has the time to hand-dig out the septic pipe to the tank to see what the problem is. The dig is back-wrenching work in clay and rock. But at 60, Larry is up to the task. He may complain of a stiff back and feeling like his humped-over father taking a stroll across the room to loosen it up, but he is taking his time. Hot showers and aspirin provide some discomfort relief for him. But, "He's all right."

Larry decided power equipment was too brutal for the sensitive area where the septic pipe co-habitates underground with power wires and water pipes. His brother brought over a professional concrete cutting saw, so they could cut out the pad for the outdoor shower Larry also had to remove. The sturdy lattice privacy panels surrounding steel walls for the shower stall sat directly over the bend in the septic pipe. Underneath was a nest of roots, as expected. The pipe was a conglomerate of cast-iron pipe nested into a terracotta bend also nested into another cast iron pipe connected to PVC connected to cast iron again leading into a brick and concrete-block septic tank originally built in the 1950's. Both connections to the terracotta bend leak, which means tree roots have found entries. And, lo and behold, the pipe travels uphill to the tank. Who woulda guessed that? No wonder we can't flush toilet paper for more than three days after snaking the pipe.
Posted by Kathy Crowley-Gardner at 3:43 PM 2 comments: