More on The Birds 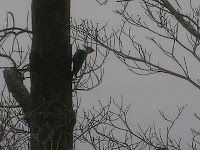 When ah firs' took da dawgs out dis mornin', I heard a hammerin' noise in da trees, but ah couldn't find da source. Later, whilst sittin' on the sofa drinkin' cawfee, mah huzbund and ah saw Woody Woodpecker jus' a tearin' bark off a dead pahn tree next to da shore. It's a tree we been tawkin' 'bout cuttin' down 'fore it fawls down on da dawk or da boat.

My goodness. Writing in dialect is hard work. While watching Woody pull huge chunks of bark off the pine tree, we were amazed to notice how far he pulls his head back to slam it into the tree trunk. What protects a woodpecker's head from the vibration of all that hard slamming we wondered. They must have insulation surrounding their little brains to protect them. I must look that up.

Because Woody is mostly in silhouette, it's difficult to get a good look at his big red head and crest. He is a Pileated Woodpecker. They grow to seventeen inches and this feller must be at least that. He's a big boy! 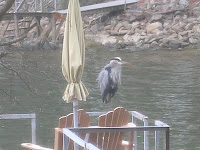 At the same time, a Great Blue Heron landed on our dock rail. I just love these magnificent birds. What another glorious day for birdwatching, even if it is a dreary day. These beautiful creatures brighten up the sky and our lives. Okay. Enough sap. Just enjoy.

P.S.: The Kingfisher is pissed. He flew over to the dock railing to land only to find the Heron still sitting there and had to fly away. It's crowded out there today.
Posted by Kathy Crowley-Gardner at 6:47 AM 1 comment:

Larry and I enjoy watching all the aviary activity on the lake these days. It is such an enjoyable and entertaining way to start the day. We keep the binoculars handy, and Jackson stands watch at the window begging us to go out constantly to chase them out of his yard.

These past couple of weeks, we've noticed all the Great Blue Heron in our cove. The most we counted at one time was seven. Last week we saw five. Why the odd numbers I wonder? Larry thinks it's too early for mating, although I do see pairs flying around; back and forth; in and out and around the cove. But he read that during the winter months down here they just tend to hang out in small groups. 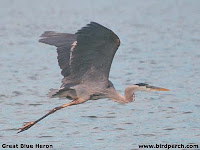 These birds are so majestic in stature and so magical in flight. I admire their grace and feel so blessed to have them hanging out around us. We have an infrared, motion-detector camera mounted on a tree in the cove trying to capture the "phantom" beavers cutting down our trees. But we also had hoped to catch a Heron slowly walking around the water, taking off or landing. I fear we have had no success as yet, but remain ever hopeful. We keep moving the camera's angle and height. 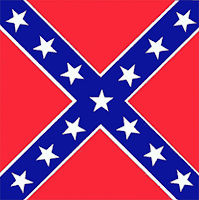 The "Stars and Bars" flag on the largest dock across from us lets us know how windy it is outside and the direction it is blowing. Who needs technology when neighbors fly their politics and we can use it for our own purposes?

There is also a Kingfisher that visits us regularly. I have so enjoyed this handsome little bird, about the size of a Bluejay, sit on our dock railing. This morning, he flew to the top of the umbrella we have mounted behind our double-glider, for a nice high vantage point. Success! He is sitting on the rail now, with a little fish sideways in his mouth: flipping it around until he gets it head-down and swallows it whole. His catch is the size of a small minnow. He is just so cute! 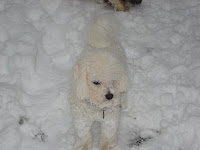 Cardinals, Blue Jays, Doves, Black birds, Sparrows, Chicadees and many other small birds frequent our seed and suet feeders, and our concrete angel birdbath. What a blessing to have these lovely creatures visit us every day. When the Mallard ducks start arriving, which they have, Jackson has some real fun chasing them back into the water and proving once again: he is really a big dawg!
Posted by Kathy Crowley-Gardner at 9:41 AM 3 comments:

Back from the Holidays 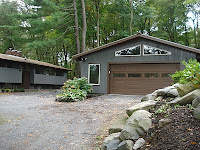 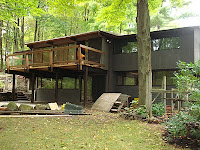 We spent twelve days in Massachusetts and Rhode Island, visiting with my family and checking on our houses. Lexington is holding up well, and the contractors we hired to plow snow did their job. They didn't shovel the paths I requested, though, so I emailed them to do that for the coming snow this weekend. There will be another open house on Sunday.

Everyone likes the house, but price is an issue and we have received no offers. We have lowered the price one hundred thousand dollars already, and are unwilling to go lower. We'll just sit on it for as long as necessary. We already purchased three months of "vacant house insurance", and if we have to purchase three more months, so be it. We have plenty of people checking on it and feel confident that our buyer is out there somewhere. It's just a matter of when they show up. At this point, we will not make any money on the house to upgrade "The Lakehouse". We'll just be able to "break even". So be it. With the market the way it is right now, we have no choice and no control. We just have to get out from under. This house constitutes half our monthly expenses by itself. Enough already. We'll be on a fixed income in two weeks.

Since returning to "The Lakehouse" we haven't done much renovating or work. Lots of trees are down, and to save money, Larry now has time and his chainsaw to cut up felled trees rather than buying a cord of wood. He has been keeping up with the wood supply and is getting his exercise at the same time. Maintaining a nice fire not only takes the chill off our house, but warms our souls too. We have a great fireplace.

I got a cold, so I have been laying low and trying not to get what family and friends up north have gotten: bronchitis and sick for two weeks or more. It's been mild here. The temps are mostly in the low to mid 40's at night, and into the mid-50's during the day. So, I bundle up and walk around the yard when I let the puppies out just to move around. My butt hurts from all this sitting and my lower back is tight. I stretch it out, then sit again to read or lay down to nap. Larry's job right now is to take care of his sister, while I am a germ factory. Not a good thing to be around cancer people.

We got some rain last night and it is dark and cloudy today. This must be what we'll have when snow hits New England on Friday. I'm happy to be here.

We are busy making plans for Libby's surgery on Tuesday in Charleston, SC. Larry, Libby and her husband, Ed, will have to drive the two hours down there to a hotel Ed found so she can be in the Medical University of South Carolina (MUSC) at 6:00am on Tuesday. Ed found a hotel six miles from the hospital that has suites with a kitchenette for $179 per week. We discovered that the Ronald MacDonald Houses only take families of cancer patients nineteen years or younger. Otherwise, hotels with MUSC discounts are $75 per night. Not a good deal when we'll be there ten days or more. We hope she can be shipped back up to Lexington Medical Center, which is our hospital, and would make staying with her much easier and cheaper. 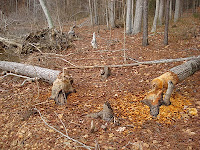 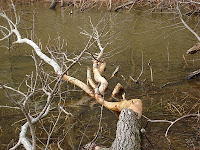 The beavers here at the lake felled another tree. We found it when we got back. It was one they had already chewed. They decided to chew lower down on the trunk and it finally fell over. They have also been continuing to enjoy the bark on top branches of the previously felled tree in the water. They do love their bark!

The camera we set up to capture their activity has been a huge bust. We haven't gotten any critter pictures, and are very disappointed. We'll keep trying, though. We're bound to get something sometime. We keep moving it around to what we think will be the best vantage point. We're bound to hit the mark sooner or later.
Posted by Kathy Crowley-Gardner at 6:37 AM 1 comment: