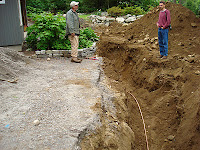 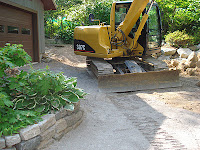 It's been a very long time since I've updated this blog. A lot has happened.

Our dream of reaping funds to renovate "The Lakehouse" were dashed as the crippled real estate market ruined our plans by not allowing us any funds at all when we sold our Lexington, Massachusetts home. The upside of this disappointment, however, is that we were able to walk away from this home with enough money to have a nice dinner and a bottle of wine to celebrate. That's the lemonade we made from the lemons thrown at us during this sale. What a nightmare it turned out to be, but we came out unscathed and now debt-free of a "balloon" mortgage that was suffocating our financial future.

The biggest shocker of the sale was that we discovered our neighbors, who we thought were our friends, turned into the "nightmare" neighbors they were afraid of getting when we left. The Saturday night before our closing on a Monday morning, the buyers threatened to walk away from the sale when they learned what the neighbors were doing to us. Let me make a long story short.

Because the neighbors' house was older than ours, their water pipe was installed on our property from the street. Our deed had an easement on it for this pipe. When we built our garage, we had the town "find" the pipe only to discover it was not located in this easement which was fifteen feet from the property line, but more like fifty feet into our property, and directly under the footprint of our proposed garage. We wanted to relocate the pipe around the outside of the garage footprint, but the town badly advised us that we wouldn't have to do that if we just laid a capped-off PVC pipe beside it that terminated outside the footprint. They inspected the pipe and permitted it. We thought we were home free. BUT NOOOO!!! 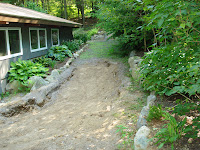 When we saw the Purchase and Sales Agreement, there was wording that made me question the pipe's location with our attorney. We quickly found out we would not be able to sell the house with the pipe left in its existing location. We thought, if we have to pay to move the pipe now, why not just get it off our property all together. So, we approached our friends, the neighbors, and asked that they pay to connect their house to the pipe that we would pay to install in the "paper street" that ran along side our property that they used as a driveway. We also said we would repave the street afterwards. Not only did they refuse to pay, but they refused to let us dig up the street at all; their property, or disturb them in any way. In addition, they said, "We did research and discovered we have legal documents that declare that street our private driveway and you have to close off your access to it." When we built the garage we created a second driveway out the paper street for safer access to the main road and additional parking for parties. We helped maintain the street with our neighbors, and there was never an issue until "open houses" brought unwanted traffic their way while we were in South Carolina caring for Larry's dying sister. At this point, we stopped talking to the neighbors and got our attorney talking to their attorney and the buyers' attorney. Don't you love it so far?

Because the neighbors were being so stubborn about access to their property, we decided to move the pipe (after all attorneys agreed, and full title would be granted to the buyers) outside the footprint of our garage as we had wanted to do in the first place. It would have been much cheaper then, but ce la vie. The neighbors were also pushing us to close our second egress out the paper street, but our attorney told us were were not legally obligated to block off the driveway, so we didn't. Then, she changed her mind and suggested it would be easier and nice to just do it as long as we dug up VW "Bug"-sized boulders while digging the trench to lay the new pipe anyway. So, we had our contractor block off the driveway with these boulders, leaving a pedestrian opening only. This was fine with everyone until our realtor came by. 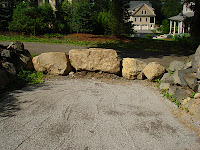 She told us that the buyers "would walk" if we left those boulders there because the property was advertized with that second egress and we were legally obligated to keep it open. So, we once again consulted our attorney and had the boulders removed. This thoroughly pissed off our neighbors, and they flat-out refused to sign off on the old easement to our deeds unless we blocked it up again. So, we felt like we had a gun held to our heads by both the neighbors AND the buyers. We were "between a rock and a hard place"...literally.

Long story short, we didn't put the boulders back. But the buyers' threatened to walk when they found out what was happening. They got a landscaper to quote $15,000 to plant an approximately ten-foot driveway opening with mature trees and wanted us to pay the entire amount. They did not want us to put the boulders back. They wanted to do it themselves so they wouldn't have to even see the neighbors. We offered half. They refused, so we countered with $10,000, and signed away a check to them at closing. We had enough left over from the sale to pay off our attorney and the guy who dug the pipe, plus the dinner. We were so angry, but soon got over it and are now happy to be done with it all.

We decided that whenever we get around to renovating "The Lakehouse" with our newest plan, which has been greatly simplied, we'll have to go deeper in debt again with either a refinance or a higher equity loan/line of credit. We won't be doing anything very soon, because for now we are just enjoying the "breather". Maybe a year from now, we'll decide to do something at the lake. But, the house there is perfectly livable now, so we're in no hurry. 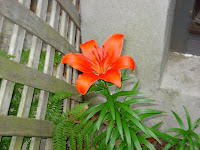 Lessons learned: You can never "really" know somebody. And, "Dominate Estate" versus "Subservient Estate" legally means the dominant party (our neighbors) were granted an implied easement once we made the new pipe location known, and we as the subservients could have been forced to tear down our garage if the dominant neighbors really wanted to play "hardball" over the pipe's location. When you buy or sell property, check what's under the land; not just what's on it. Really?
Posted by Kathy Crowley-Gardner at 7:26 AM 2 comments: