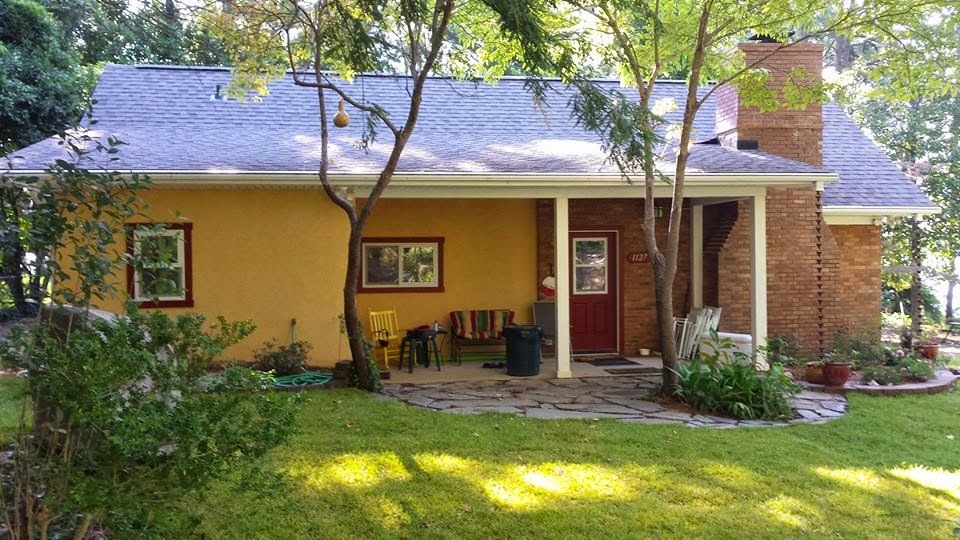 We arrived back at the lake house late on August 9th after visiting our friend, Nancy in Annapolis. Larry and I also had a lovely dinner with old friends and colleagues of his nearby, and took Nancy out for her birthday on the 8th for a wonderful Cuban dinner, complete with a luscious rum tasting.

Upon arrival at the house, and after bringing in all our stuff from the truck, Larry heard a drip, drip sound. He looked all around and deduced it was coming from our chimney. He pulled the screen back and found at least three inches of water in the hearth and water spilling in. He lifted the flue and water poured down. It had been raining all day, and we've experienced heavy rains since the house was finished, but water has never come in. I texted our general contractor about the leak and he came to look at it on Monday. Larry had gone up on the roof and taken pictures of the cap. 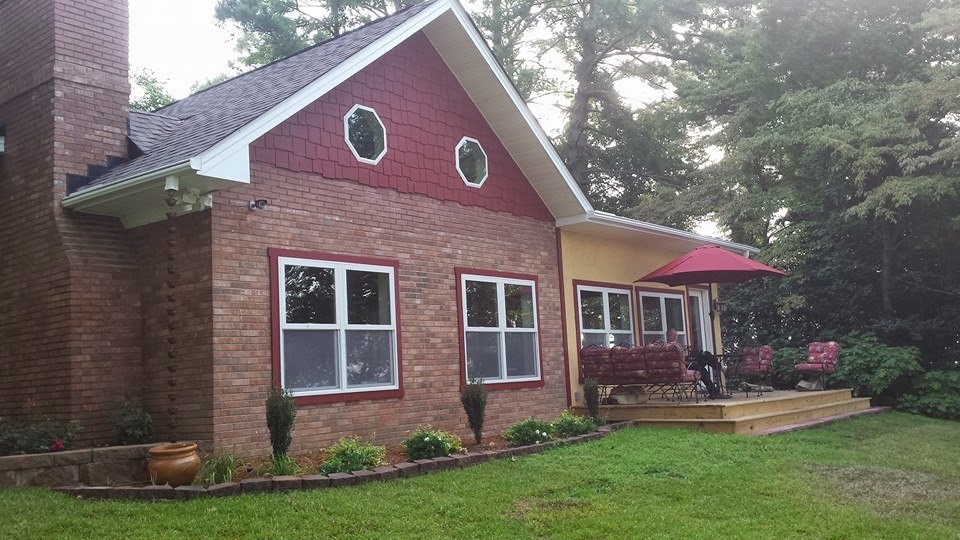 The contractors who raised the chimney and capped it did so with concrete. Using concrete to cap chimneys and stoops made of brick is common here in SC. Our cap was cracked in several places and had pulled away from the brick. We all deduced that cumulative deterioration over the short months of its existence cause the cap cracking to result in the leakage. So, our GC is finally having a stainless steel cap made to fit and he should be installing it any day now. He should have done it over a month ago as promised. Ah, well. It will be painted black so it will blend in with the roof. No damage was caused by the leaking. 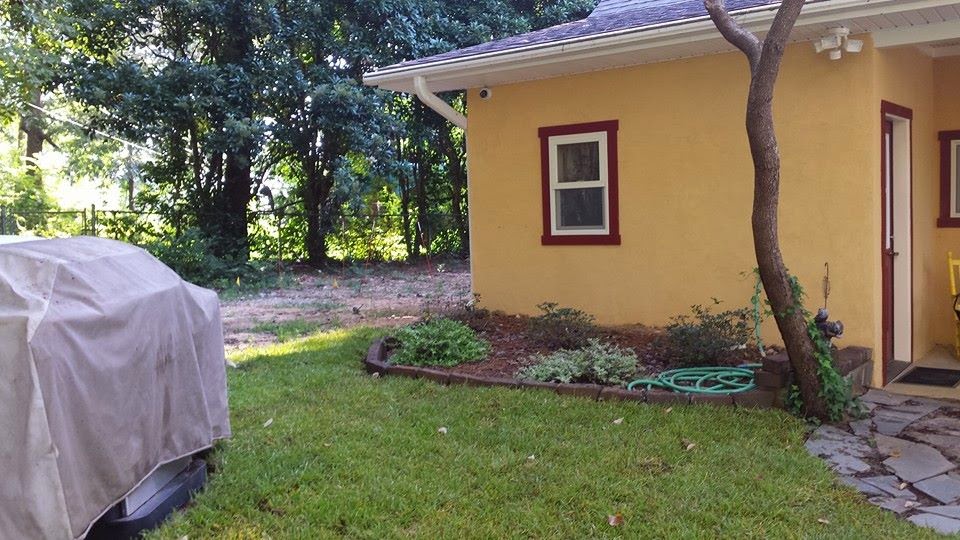 Next, a good friend who recently stayed in our house called to let me know there was mold in our bedroom closet. I immediately checked it out, and found the closet baseboard covered in mold. This find was more concerning to us. Our GC contacted a mold guy who came by with some very interesting equipment that detects water flow behind walls. He determined there was no leak, after Larry took pictures of the leaf accumulation in roof valleys and cleaned it off. He deduced that wood to frame the closet was wet when installed. Closing it in with drywall never allowed the wood to dry out property, causing the mold. The GC cut up the drywall a foot from the floor and removed all the baseboard. The mold guy said to dry it out for a week with a fan then close it back in. We had a little portable heater that we run during the day to dry it out, and next week, the GC will come replace and repair the drywall, paint it, and install new baseboard. No cost to us. Phew. I feel so relieve that it was an easy fix. Since we arrived, mostly, Larry and I have been working on the landscaping. We called a local landscape company for a quote, but he never got back to us with one. So, I called Super Sod out of Orangeburg, SC and ordered three pallets of Centipede sod to be delivered at a cost less than we saw on the local landscaper's web site. Larry laid it all in two days. I raked the areas to be covered and put extra sandy soil we had left from the build over the rockiest places. When it was all down, I took bags of top soil we had in the shed and covered as much of the edges as I had soil to keep the roots covered. Then I spread Centipede seed over the patches and areas needing extra help. Now, we just keep it watered, and wait for its first mowing. The yard looks so beautiful. I can't even get over how lovely it is. We feel so blessed.

We have been pruning shrubs and trees as well. Because we cut down nine trees a few months ago, the extra light and all the rain we've had has caused the invasive Mimosa trees and Wisteria to run rampant. We could not believe how big and voluminous they were, especially the Mimosa trees. I love Mimosa. I think they are beautiful. But the words of Fred, the former owner of this property keep coming back to us. He talked about the war he had with the Mimosas. We didn't realize what he meant. Now we do. We also found poison that works well to kill them at the root. Their roots go deep and far, just like the Wisteria. We cut down the plants and paint the stumps with poison. It is a lot of work, but we achieve the desired results.

The grass makes the area around two sides of the house look finished and beautiful. We still have lots of landscaping work to do, but for now the place feels finished. Home ownership is a process. That's for sure. We work hard, but each completed section provides us with such satisfaction.

Yesterday, while Larry was outside under the pontoon replacing red wiring so we can once again have a working sonar on it and a functioning gas gauge, I went out to help him. Mostly, I swam around. Then, we went to the movies and out to dinner. It was a nice relaxed evening with gin and tonics on the boat last night while we watched the sprinkler system water our new grass. Life is very good.


Posted by Kathy Crowley-Gardner at 8:33 AM No comments: