The time finally came after I pushed and pushed. We moved back into The Lakehouse on Thursday, May 22nd. We arrived with a twenty-six-foot U-Haul truck and three other full vehicles to a half dozen pickup trucks and cars of workers blocking the driveway. They descended upon the house and weren't supposed to be here. I announced many times over the week that this was moving day, but many workers didn't finish their jobs. Trim guys were cutting wood, painters were on ladders, the backup generator was being installed, and others I just can't remember were in our way.

We hired a crew to help us unload the vehicles and they had been waiting almost two hours for us. Loading the truck and our cars took longer than expected. We almost allowed the workers to put our move off, then I put my foot down. "You! Please move your pickup. And, You: would you please move your vehicle. We're moving in right now. Please move those tools off to the side. Thank you." So, my brother-in-law, Billy, backed the truck up to the door and in we went. By the time we finished unloading all the vehicles, it was 9:30pm. We still had to go back to the in-laws' house where we had been living to pick up our dogs and bring them back home. We were exhausted.

But, waking up in our newly renovated lake house was magic. The house is beautiful, and we are so happy we went the extra mile to make it just right. Our budget was exceeded, and our retirement fund is a little lighter as a result, but we think it was well worth the price, stress, sweat and anxiety. Our son and daughter-in-law arrived the next afternoon, and they were so helpful. Having their extra hands unpacking and continuing to get organized was priceless. On Saturday, we had a house-warming party for family and close friends. It was wonderful.

Everyone was wowed by the house, and Larry and I felt so good as a result. We still have lots to do in our last week in SC until August, but we'll get it done. Larry has to install security cameras. He has to repair the sprinkler system, add new heads and install (wire) a timer so it will run while we're away. We created three new gardens that have to get watered while we're gone. We're heading back to RI to get ready for my Celtic 65th birthday, 13-day trip on June 23rd.

We also have to plant all the plants I bought, the free sod we got from Billy, and spread grass seed over the fill that is slowly being washed out from heavy rain. All our systems were well tested the first weekend during the party, and we got
an unwelcome surprise. After only three dishwasher loads and some hand washing in the kitchen sink, we learned that the dry well installed to off load our septic doesn't work.

As of this writing, the new drainage system has not been fixed and I can't do laundry or use the dishwasher. Larry fixed it so I can at least wash dishes in the kitchen sink, but the water drains into a pan under the laundry room sink. We dump that one to two times a day. I have to go to the laundromat tomorrow and wash two weeks' of laundry. I thought I was done with the laundromat. But, NOOOO!!!!

The guy who yesterday cut down nine huge pine trees and will resurface our driveway and parking area will come back Monday morning to finish picking up logs and debree. He is only willing to discuss the tank we want installed as part of the trench that doesn't work for draining our kitchen grey water. He says he's been working around here for twenty-five years and is sure he'll hit slate ledge if he digs down four to five feet. Larry disagrees and has good examples of why.

We are leaving for RI next Saturday, so we are going to push hard to get this guy to do what we want and get the drain fixed well before we have to leave, so we can test it before family comes here while we're away. More stress. But, today, we had a lovely breakfast on our new deck under our new umbrella. The pups discovered a new "friend" in an alligator snapping turtle that probably laid her eggs in our sandy fill before sauntering back down the yard and disappeared into the lake. The heron, osprey and hawks flew around our cove and over our heads while calling their calls and singing their songs. The sun finally came out, and I have to get to unpacking bins again. Larry is out buying supplies for his projects, and on it goes.

We love it here, and can't wait to get back so we can just completely enjoy living here, and not have to worry about fixing, or unpacking, or installing anything. In the meantime, I'll keep you posted on our future landscape projects here. The Lakehouse isn't fully complete until the grass is grown and the gardens are finished. Until then, have a great summer, and thanks for reading.


Posted by Kathy Crowley-Gardner at 12:26 PM No comments:

It's so close I can taste it! 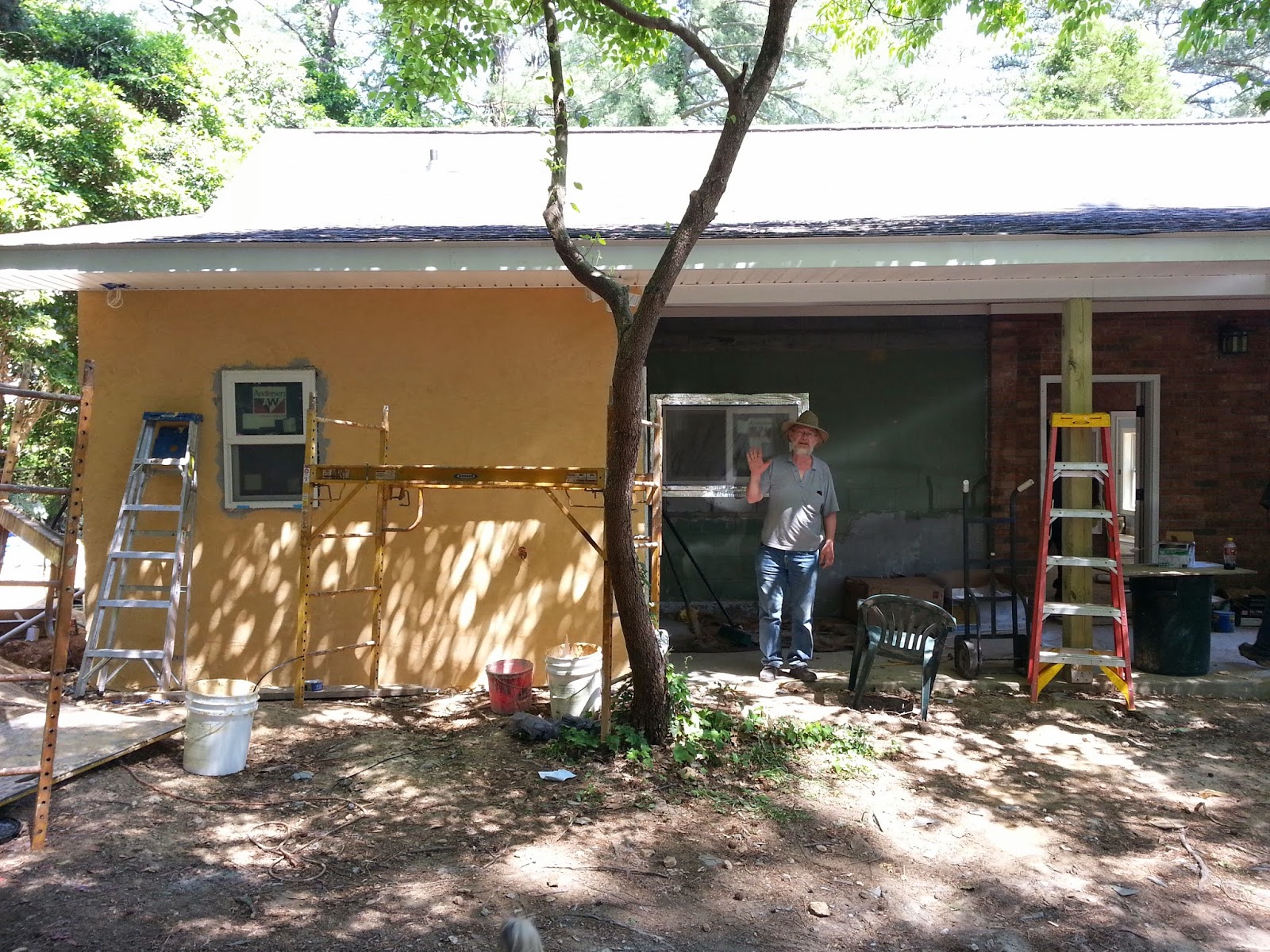 Renovations are moving along pretty well now. Only two more weeks until we get to move back in, hopefully. We have a housewarming/thank you party planned for Saturday, May 24th, and my son and daughter-in-law are flying in on the 23rd. I just hope we're not scrambling to get set up on the 22nd. Let's hope not. 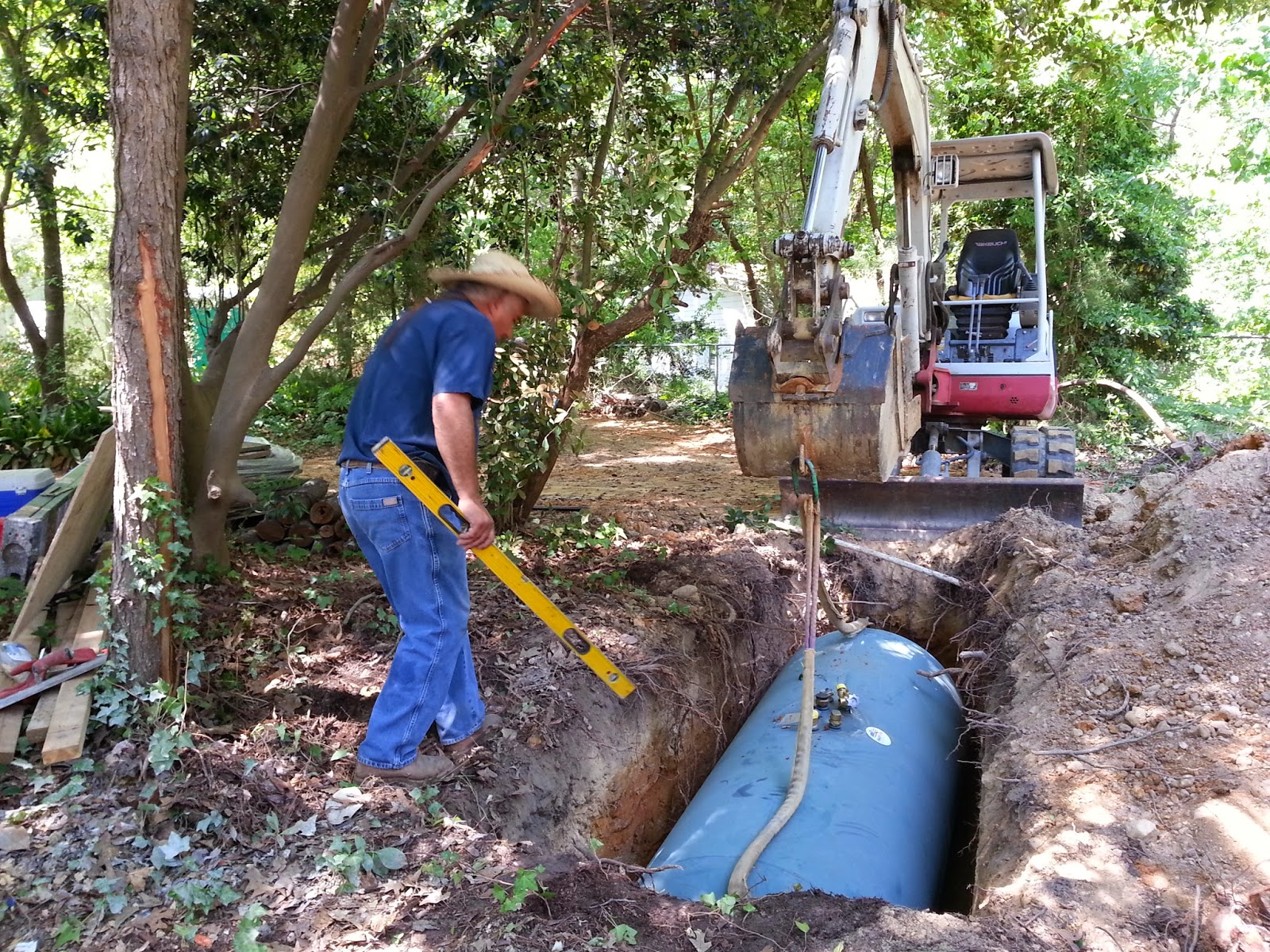 Yesterday the 500-gallon propane tank was delivered and buried. What fun it was to watch a very large man operate small equipment. One little backhoe looked like a Tonka truck. We wanted one so badly.

The stucco continues to be troweled on. We chose the color "mango". It figures I'd think of food when searching for a house color. Half of the house is covered now. It should be done in a couple of more days. Then the guys can come and finished adding Hardy "shake" shingles on the house peaks, then the window trim. Lastly, the outside finish trim will get painted "Fireweed", a dark 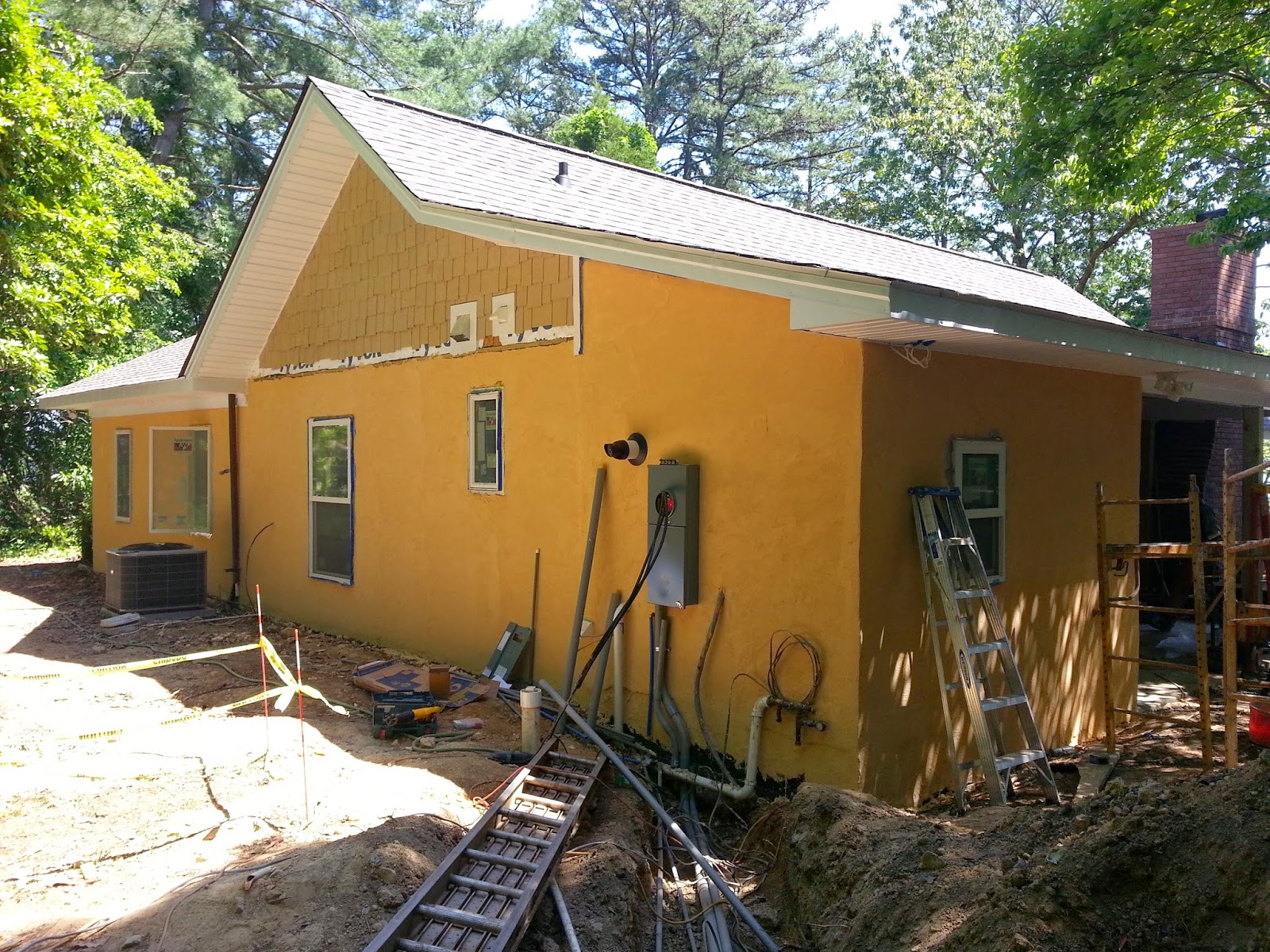 cinnamon-red color to complement our brick. It should be very pretty when finished. 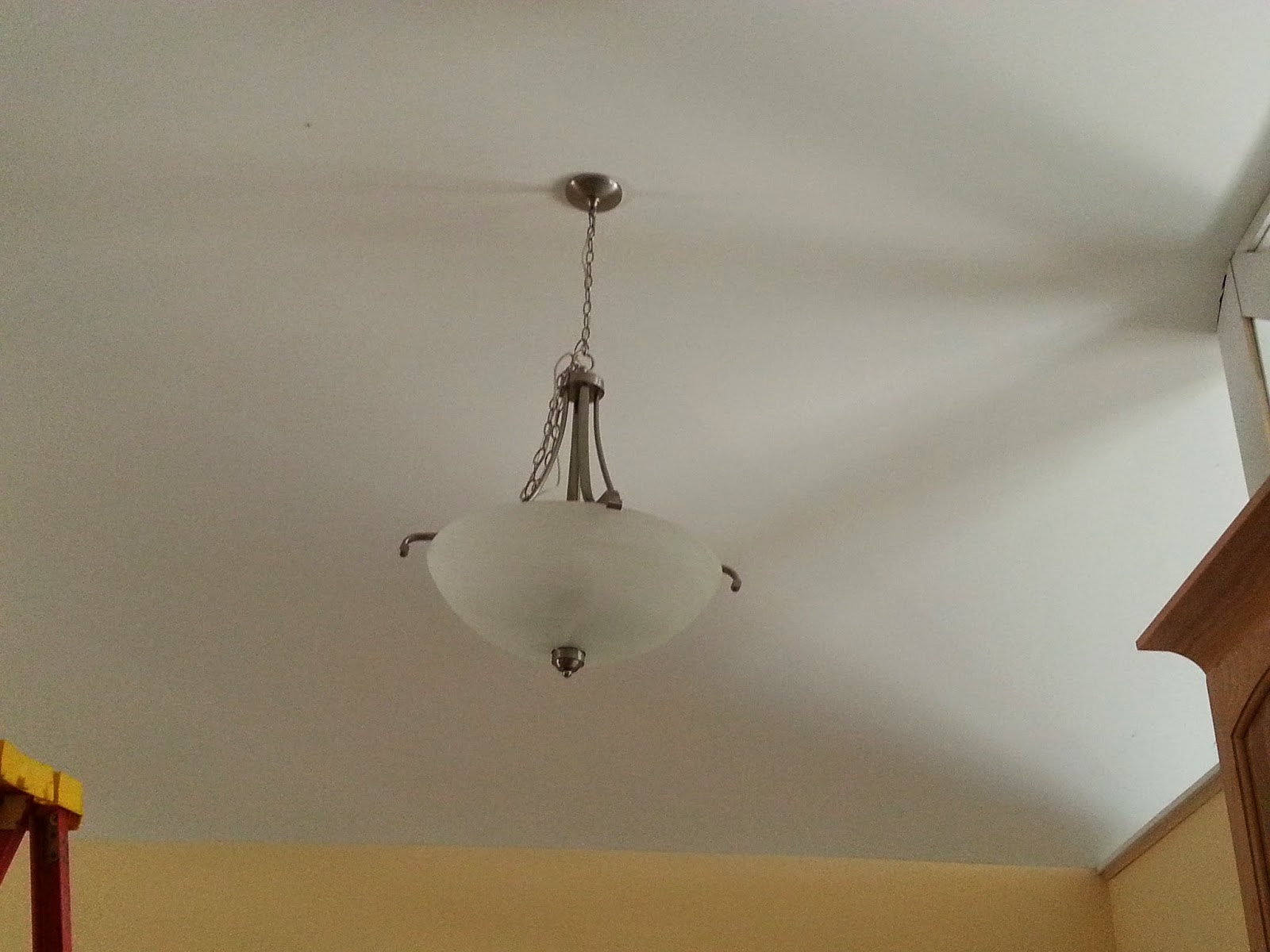 Electrical fixtures are pretty much all installed now. I love the outside sconces we chose, the dining area chandelier and pendants over the kitchen sink. I'm also happy we chose neutral fixtures, because they look very classy with the wall and tile colors. 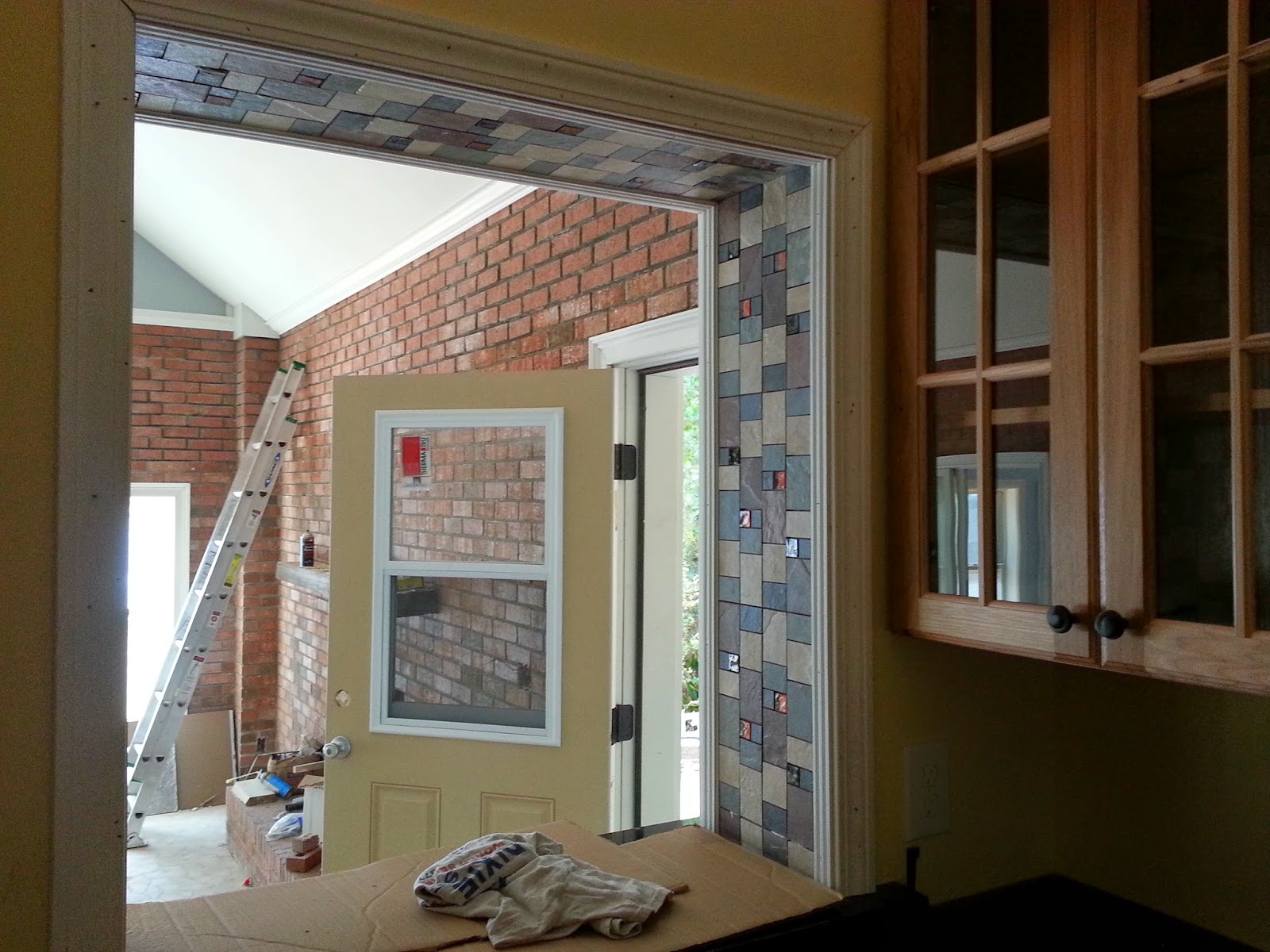 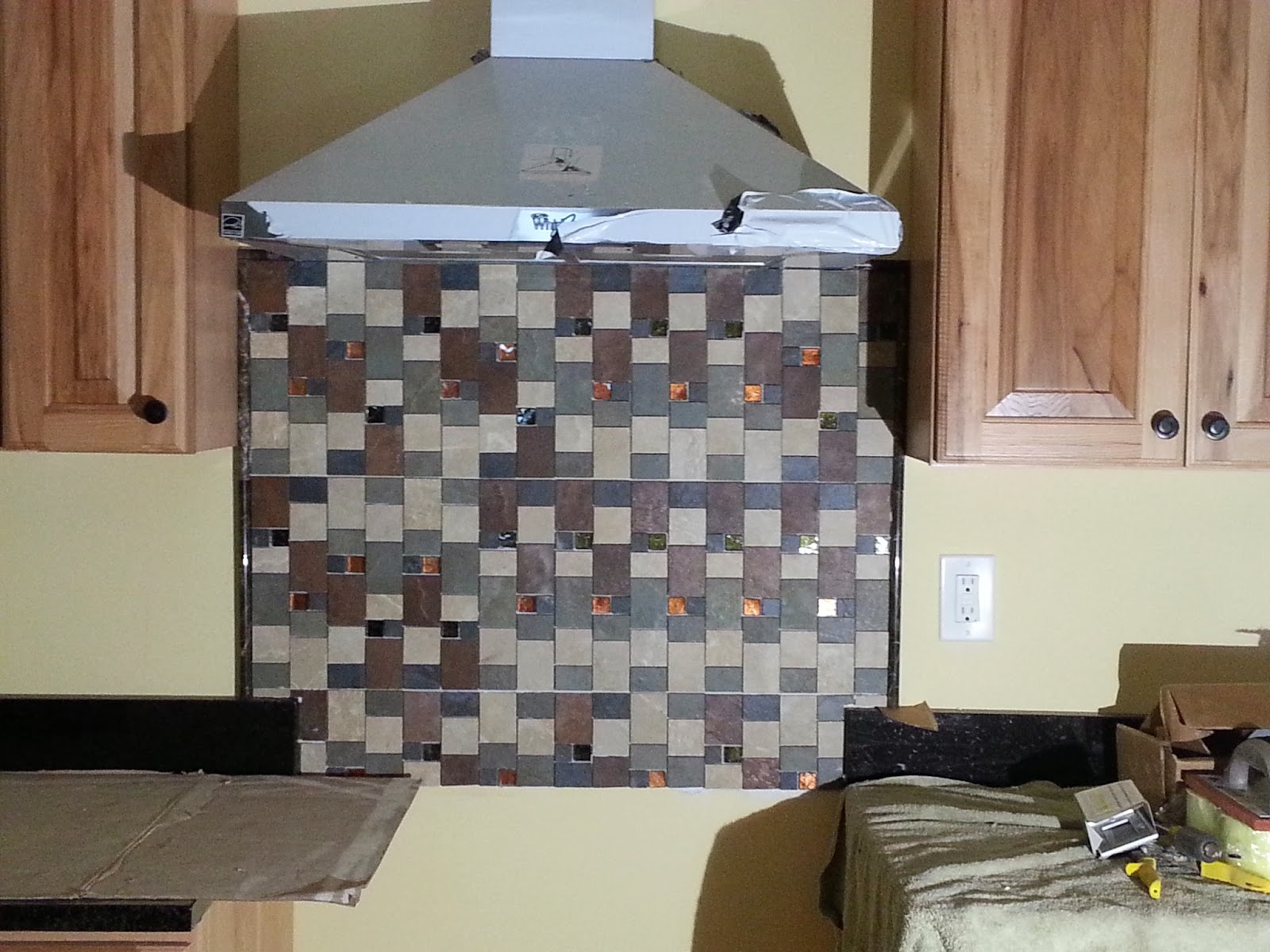 Our backsplash tile looks beautiful. The painter/stucco woman suggested we also put the same tile around our new "service" window in the kitchen. It was a great idea! The tile makes that window just pop. I love it with the "Black Pearl" granite counter tops and Hickory cabinets. Everything is coming together nicely. 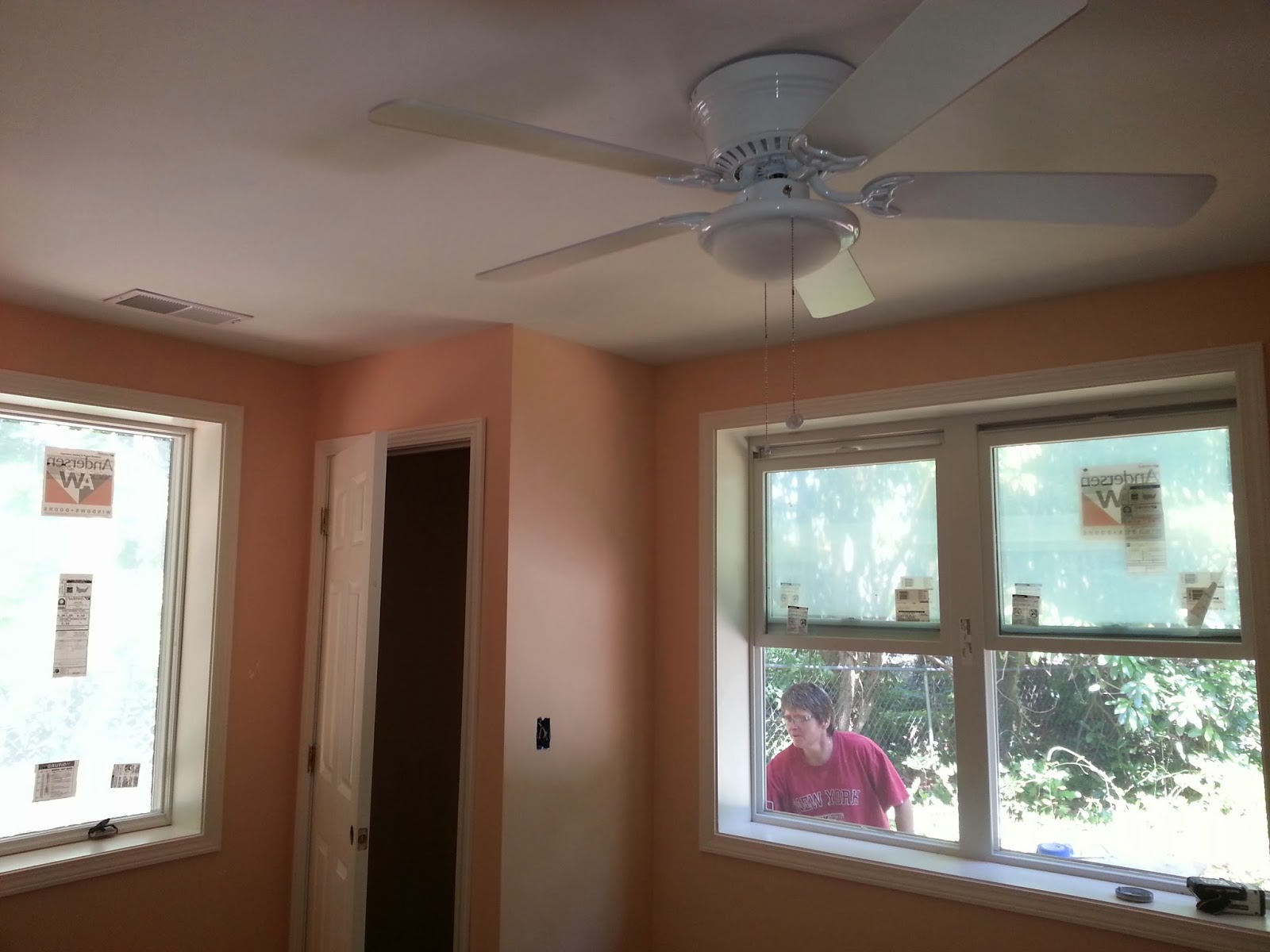 All ceiling fans are now installed with switch and other plates. The rooms are looking very finished. The only electrical things left to be installed are the bathroom vents, and the connector (I can't remember the name of this) for our backup generator.

Interior trim is being painted now, and touch-up work for the walls will be required. The walls were painted before the trim guys came in with ladders against the walls. 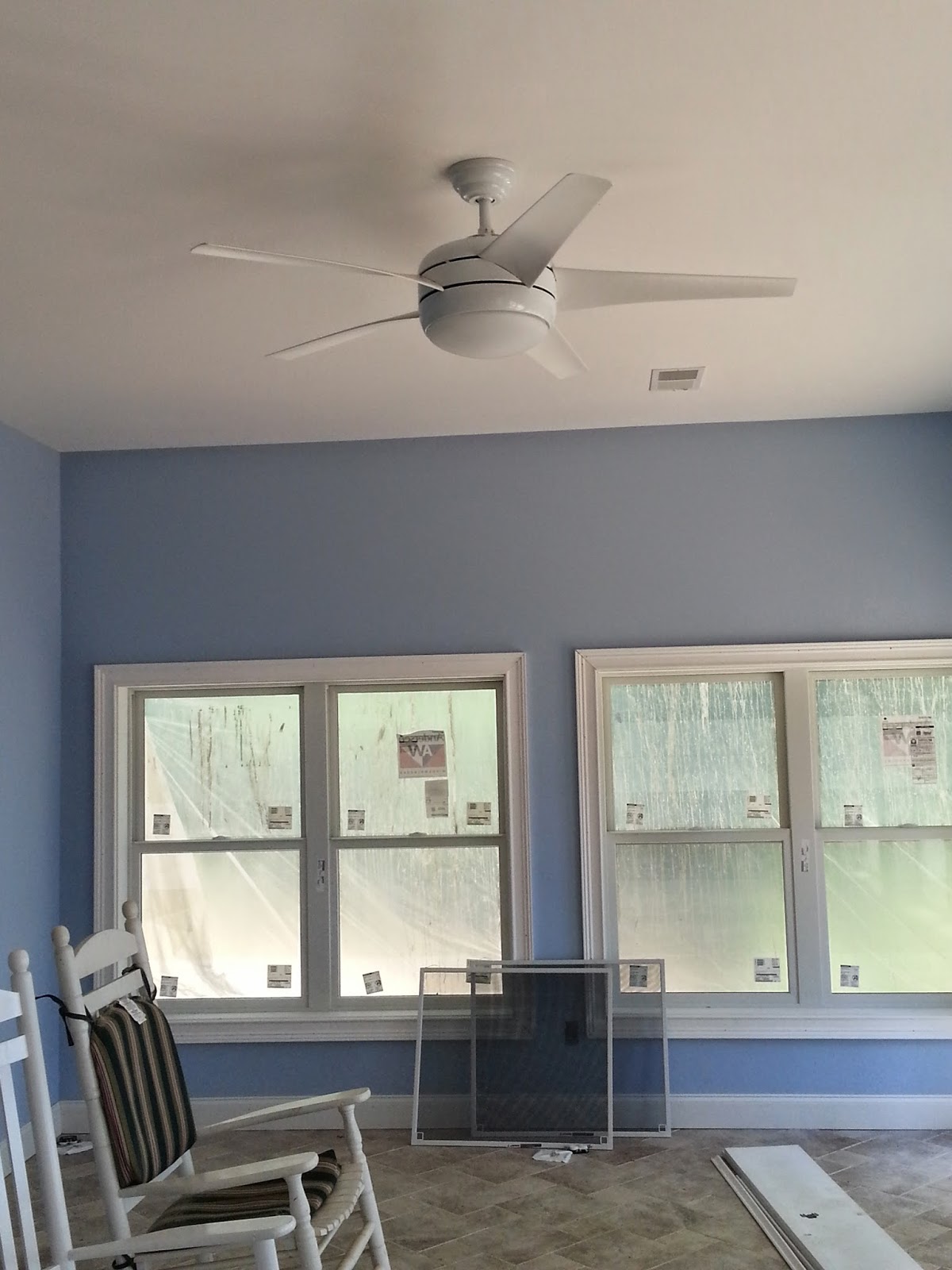 The house now has water, and the lame plumber ran unfiltered (read that orange) water into all our new toilets and sinks and pipes. Really? We (read that, Larry) had to bleach them and figure out how to install a stop-gap measure to protect this from happening again until permanent power is installed. Our circuit breaker is in, but no temporary power has been connected yet. I don't know why. Extension cords run everywhere.

Our GC, Bill, says we may be able to get a final inspection in the next week. After that inspection, we can get permanent power connected to the house, and all the final electrical things can be installed: security system and internet. We won a $1,200 security system at the local Home and Garden Show a couple of months ago. It's the kind of system we can turn off lights remotely with our Smart Phone. Cool, huh?

We're almost done, and the end is so close now, I can actually taste it.
Posted by Kathy Crowley-Gardner at 3:06 AM 1 comment: