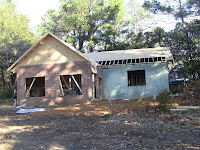 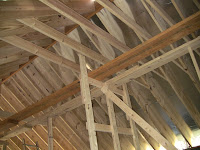 Larry left to come to RI on Friday, but before he left more improvements were completed.

Roof rafters had to be replaced. The roofers installed 2x6's instead of 2x10's. Really? Anyway, the team of four guys replaced them quickly, and soon sheathing covered the rafters on both the main house and the back bedrooms. At least when it rains now, the interior will remain mostly dry.

The inspector approved all forms for two new concrete pads that will be floors for our laundry room and sunroom. The forms had to have fill and sand shovelled in to level them as a more drainable base for the hard, clay soil full of rocks that is the land that surrounds our house. Larry also built a form to extend our broken boat ramp that he cleaned up to prepare for the new concrete pad.

One of two huge concrete trucks arrived on Wednesday, and those southern "boys" had fun directing the pours, levelling the material and finishing it all off with broom sweeps for traction. Accelerator was added to the concrete to speed drying and curing time. A vapor barrier was installed under the sunroom pad with a footing of sorts on the entry side.

Only the entry pad took longer to cure than the rest. No accelerator was added to it. Larry shared a beer and a tequila shot with the last guy on site before he left for the Christmas break. This guy was waiting to broom finish the pads, and Larry had to get back to his brother's house to pack for his plane ride the next morning.

But, before leaving, Larry caught one our favorite visitors on the lake looking for food. 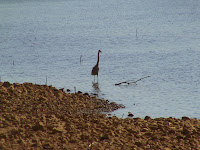 Work continues while we're away. I look forward to seeing all the changes in person when we return Sunday night after Christmas. On pre-New-Year's-Eve, we'll take a ride over, and I can meet the workers and inspect progress myself. The project remains very exciting.

Merry Christmas, everyone, and Happy 2014!
Posted by Kathy Crowley-Gardner at 7:23 AM No comments:

Not much has been happening at the lake house. Rainy weather and the Thanksgiving holiday slowed progress way down.  The up side is that Larry ordered all our appliances and kitchen cabinets, and most of it has been delivered. We're just waiting for the new washing machine. 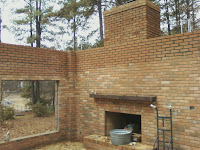 The lake is at its lowest level this round. Larry can now walk out there in his tall boots and remove debris that has collected around the dock. He can also check our sprinkler system pipe and footing to make sure all is still well, or repair it if needed before the water comes back up in January. The lake level is at 350 feet now; "full pond" is 360. SCE&G (South Carolina Electric & Gas) keeps it at 358 feet generally. 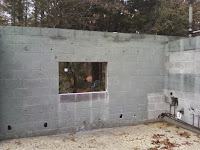 The masons finally completed bringing all the house walls to equal height. New bricks were added and cinder blocks where required. 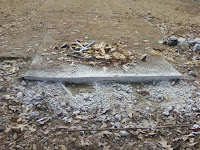 Larry has been alone in his "man cave" much of the time, but finding chores to keep busy. The latest, besides cutting down pesky Mimosa trees (they are SO invasive!), he evened off the concrete boat ramp.

The next chore will be to install forms to get ready for a new pour next week. Before evening out the top of our ramp, he found he had created a lovely map of the state of Virginia. He cracks me up. 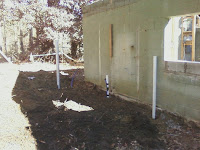 The plumber is there today. He and an assistant dug out the septic pipe with a big machine. Larry dug the same pipe out several years ago by hand to fix a toilet overflow problem we suffered with for years. He discovered that the pipe went up hill. Really? No wonder we had problems. Geez.

Drain pipes are being installed for the new washer and kitchen sink. The pipes will once again sit under the new laundry room concrete floor. A dry well will be dug next to the septic tank to take gray water from the washer, kitchen sink and new dish washer. Roofing materials were also delivered today! Bill, our General Contractor, says work will begin on the main house roof immediately. Here we go!
Posted by Kathy Crowley-Gardner at 10:17 AM 1 comment: