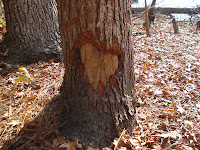 On our last trip to "The Lakehouse", we discovered that beavers had begun weeding our forest. Actually, we discovered this in about the third year we owned this beautiful place. They felled two trees then, and we thought that was the end of their foray. But, NO!!! We found a "love carving" from the beavers this morning!

Last spring, we found another tree, whose base was left in a chewed hourglass shape, sans its bark. Apparently, beavers love to eat the inside meat of the bark first. That tree has now falled down, and they have moved onto the adjacent Maple. Beavers don't prefer pines; they like the hardwoods. We live in a pine forest and the Pine Beetle has begun eating them. We must get those trees proactively cut down to stem the damage from these insects. 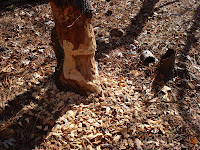 Now, we have the beavers who want the hardwoods near to the shore. Not only do they like Maples, but they also enjoy Crepe Myrtle. Now that I know they are after my blooming trees, we have to figure out what to do. We don't know how many beavers we are hosting right now, but we learned that families can be up to eight members. The young tend to stay with the parents for up to two years after birth. 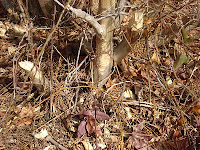 I brought Jackson and Mattie Grace to explore the cove this morning and capture the damage to show you here. They have been hearing the beavers down here at night, but we don't have a strong enough flashlight to go exploring. Since beavers in South Carolina can grow up to a whopping sixty pounds, our poor little ten-pound "poof" dogs, who think they're really country dawgs, will be outmatched with those long, sharp teeth and claws. We keep a close eye on our babies at night, especially Jackson. He loves to explore and is hardpressed to go to the beaver work area. He doesn't care about the darkness. He's a big boy, so he thinks. 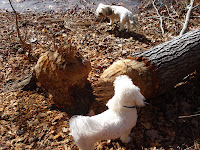 Larry did a little research on the web and discovered there's a hard cloth or wire netting we can put around the base of trees to prevent the beavers from eating them. Also we plan to buy ourselves a motion-detector digital camera to mount on a tree nearby and capture those varmints with a flash. We sure would love to see them. Next we'll also buy a strong flashlight/spotlight for ourselves for Christmas. It'll be fun to try and catch the invaders at work. 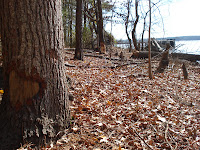 They carried off the Crepe Myrtle branches, but we have not been able to find a dam or what looks like the beginnings of a lodge so far. We may take the boat out and check around the other side of the point for signs of a "build"

More on our beaver adventure in another blog. In the meantime, here's a link of interest. Enjoy! http://www.dnr.sc.gov/wildlife/beaver/beaver.html
Posted by Kathy Crowley-Gardner at 9:07 AM 2 comments:

Getting ready for Christmas 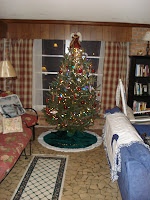 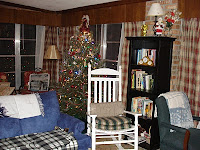 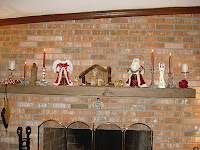 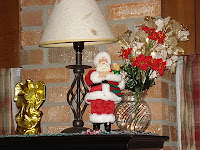 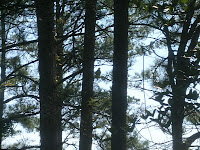 I have never not been in New England at Christmastime. Well, once since I've been married, we spent Christmas in South Carolina, and my son, Chris, flew down to join us. He hasn't been back since. "It's too dark and quiet", he said. We do live in the woods after all. I knew he was a "city kid" way back when he was a child, and we lived in the country of Blanchard, Louisiana. He likes noise.

My sister-in-law is not doing well, and today neither is my brother-in-law. Cancer is all pervasive in this family right now. I was experiencing such huge stress over what to do about going back "home", that a friend posted on Facebook: "You have a lot of stress in your life right now and the holidays make it worse. Stay in one place and hunker down." Another friend seconded that motion most enthusiastically. Reading those posts made me feel like God answered my prayers. So, we are staying put and hunkering down right here at "The Lakehouse". We bought a Frasier Fir tree at The Piggly Wiggly, that was already in water and standing up. It was fresher than the tree we had cut down right in front of us last year in Rhode Island! That wasn't a Frasier Fir, but so what?

We planted the potted baby Christmas tree we bought in WalMart down here two years ago, and it is huge now! Larry commented that it is getting "very sexy", meaning it is maturing and growing at a seemingly exponential rate. It was just one of those little potted trees you see in the store for $10 and think, why bother? But, look what it grows into if you plant it. It'll be a gorgeous pine one day. That's Mattie Grace sniffing the latest on her branches.

The day after Thanksgiving, we went to Libby's house and decorated it for Christmas. We hung festive lights outside and placed alternating lighted Santas and Frostys on her lawn. But, she remained in the hospital until a week later. She loves it. She decorated "The Lakehouse" every year since we bought this place, just so it would be homey and festive when we arrived, usually after Christmas. It was the least we could do for her.

So now that we're staying put, we've decorated "The Lakehouse" for Christmas and are content playing seasonal music while sipping eggnog with rum; trying to keep our Bichon, Jackson's, tongue out of our glasses. He really likes it we discovered. Geez.

And this morning, Larry saw a Bald Eagle flying around our cove. It landed in the pines and sat for a very long time looking for fish. He got some rather grainy, but reasonable pictures through the windows in our living room. I just saw it fly across the cove again with something in his/her talons before landing in a pine across the cove above the neighbor's cottage. This place is so magical sometimes. Everything feels like a gift.

Larry's outside wielding the chainsaw now. Last spring we had to cut down a dead pine and because Billy had the saw at his house and didn't return it, he's only just getting to cutting it up now. We have to get Billy's pontoon boat out of the water soon, and this time we want to move it further down towards "the point" and out of our view corridor. That downed tree is in the way. And, since we've been here a pine that has been in the water when the lake was up, and was leaning pretty heavily, finally fell over onto the boat ramp. That'll have to be cut up and removed before we can haul the boat onto the trailor. There's never a loss for work here.

We've decided to rest in the month we've been here, but today, Larry chose to get back to work. I'm missing my siblings right now. In choosing to stay here, I cannot attent a special lunch in honor of our brother, Paul, who died thirty-four years ago today. Paul was the second oldest after me, and would be sixty years old now. I will miss hearing all the stories my sibs will tell at lunch in Natick, Massachusetts (Jeanne's house that I sold to her. It was my first house that I bought myself). My only vivid memories are of us as children. I didn't "hang out" in the neighborhood like the rest, so I don't have any adult memories, except of sitting quietly together, watching TV. I wish I had thought earlier to suggest someone bringing a recorder to capture all those memories. God bless you, little brother.

It is a glorious day outside today: lots of sunshine and cool, but comfortable temperatures. We'll head over to Libby's house later to visit. For now, I think I'll put in the DVD I borrowed from her, "The Nativity". I just love this rendition of the Christmas story. Why don't they televise Christmas stories at Christmas? They always put them on leading up to Christmas Eve and Day, but never at the appropriate time. I guess the television moguls decided they just have to get us pumped up to shop and once we've done that, they've done their job. We just get left hangin'.

Merry Christmas and Happy Holidays from Dixie, Y'all! Have a wonderful, joyful and prosperous New Year too. Love, Me.
Posted by Kathy Crowley-Gardner at 8:50 AM 1 comment: